Stockfish 1.9 JA by the Stockfish team.

As a starter we expect just a very small increment if any.

Although a lot of stuff has changed from 1.8, as you can see from the
diffstat below:


We have mainly removed evaluation stuff that proved to be almost
useless, we have now access to a better hardware facility(*) and we
are able to test with a better resolution our evaluation code so to
remove old stuff that we never dared to touch.

Apart from that the increment is really silly at fast time controls
(as we normally test), perhaps we could have some surprises (hopefully
not bad ones) at longer TC where the new time management code by Joona
could kick in with a bit of luck.

Another change from 1.8 is that we lowered the aggressiveness of both
LMR and pruning, we will se if this will pay at longer TC, at fast TC
change is almost zero....


(*) Yes we have now access through ssh to some boxes kindly made
available by Aleks Peshkov (I don't know if he wants to be named here,
I hope yes Wink ), this is perhaps the best thing that occurred to us
in the last months because we are now able to test each change with
5K-7K games of resolution and this really opens up new possibilities.
The first and IMHO most important asset you gain is to be able to
retest all your old code and finally detect what works from what it
seems to work, but actually does nothing. The biggest part of almost
500 lines of code reductions comes from that.

I compiled stockfish1.9 for Android and ask the stockfish team to kindly place this on their download page again. 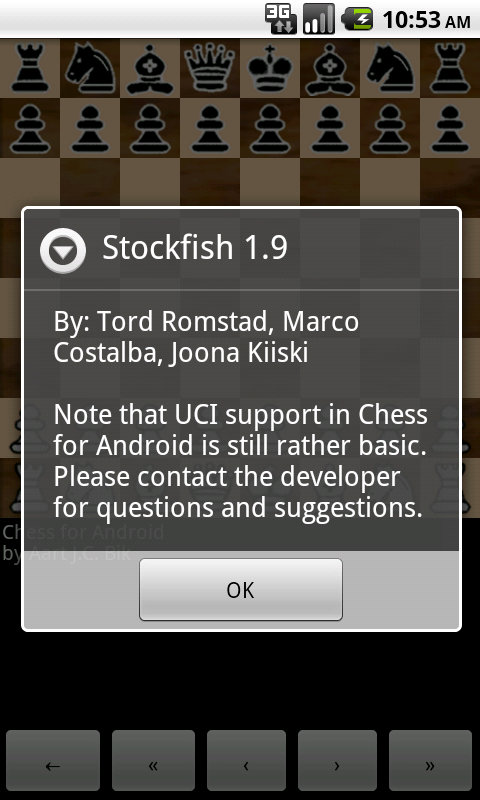